i probably should be embarrassed, but i’m not 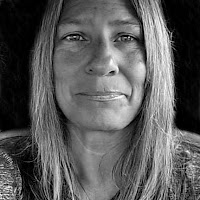 Due to living off the grid in the Maine wilderness, during Paul’s monthly IVIG treatments is a good time for me to “hit” Walmart.  I am one of these people who take a deep breath before I exit the truck and while slowly exhaling with a bit of a grumble, I make my way to the entrance.  Part of me is anxious to just get shopping done and over with as quickly as possible, while the other part of me finds any excuse to delay the task.  Such delays are, walking more slowly when I see someone emptying their shopping cart, so I can return their cart to the store for them, walking around a water or ice puddle, making sure I walk in the striped walking spots, and if nearing the door, slow further to allow others to enter before I do.

Once inside, after making my bladdah-gladdah, I’m ready to relay race the aisles.  I reach into my back pocket for my cell phone and navigate to the “Color Note” application titled:  Walmart – Home – Town.  That is where all list of needs and to-do’s get plopped …all on the same “sheet”, so to speak.   A bit chaotic, I suppose, but despite living off the grid, my mind and body live in a fast-paced world -always on the go- so a single list is easier for me.  That is, until I’m in the store where I don’t want to be, and then, have to scroll and scroll and scroll some more to see to the bottom of the damned list.  My own fault.  I know better.  In some ways, Ima Lazy Woman.

On this day, despite the many miles I put upon my feet trying to find each item while keeping in mind Christmas shopping, too, as my list became shorter and shorter I enjoyed deleting items upon it. Of course, there are times when I must pause to understand my own list, too.  For instance, Rake doesn’t mean buy a rake, it means to bring it home.  Bamboo means to buy a plant pot, so I can sow some seeds.   Activated Charcoal means to look at filler ingredients for a clay project.  Paul doesn’t even bother to look at the list when he adds something.  He gets confused at my thought processes.  I can understand why and don’t hold it against him …or myself, for that matter. 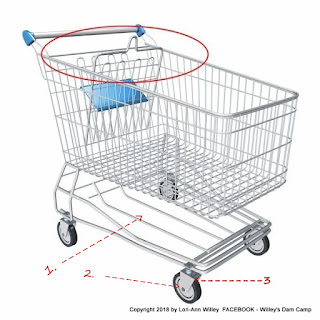 Like the sinister Grinch at the thought of stealing Christmas, my grin crept bigly as my list grew shorter.  My cart was nearly filled, as was the little toddler seat section in the front.  In order to buy groceries, I had stashed two rolled up sleeping bags underneath the cart. (see 1.)  Each encased in their own nylon bag with a cinch pull string, so if they rolled free, the sleeping bag inside would stay clean.  That was my hope, anyway.

Toward the end of my shopping “spree”, I needed to navigate to the hardware section for some wood staples.  Only then, could I “hit” the food section. At this point, my phone battery was nearing the shutdown point, which is about 68% since I dropped it. So, I tried to speed my pace a bit faster without running over a few Grammy and Grampy’s along the way.  I keep a charger and “cord” in my bag, but it is a pain in the patoot toting those along and impossible to carry in my back pocket, so I try to avoid that as much as possible.

When I turned the corner into the stapler aisle, my front tire decided to drag and balk for me.  Assuming my wheel ran over something on the floor, I pulled my cart back and turned it at a sharper angle.  Nope, the wheel still dragged.  Still, I pushed far enough into the aisle so to be out of the way of anyone who may or may not be “riding my patoot”.  To further park out of the way of others, I kindah did the lifting of the cart via handlebar and plopped the cart close to the shelf next to me.

When I was all parked neat and clean-like, I stepped to the front of my cart to see what caused the wheel to drag.  I saw nothing.  I squatted, and I still saw nothing. “What the hell?”  I pulled my Grammy glasses down and took a better look around the wheel caster. (see 2.) Yep!  Found the problem.

One of the sleeping bag drawstrings had dragged and coiled around the wheel.  Slowly, I started to unwind to free it.  “Nope, not that direction”, so I reversed the motion.  “Nope, not that direction either.  What the hell?”  Meanwhile, my Grammy glasses would not stop my long, silky hair from sliding into my face, which further blocked my view.  Toss after each toss, the hair would not behave and would quickly slide and obscure my view every few seconds.  Once, my glasses even slid from my face and onto the floor!

After a couple minutes of untangling without success, I looked around to see if there was a clerk that could help me, because I assumed, wrongfully, that I’d have to lift that corner of the cart off the floor and spin the wheel in hopes to dislodge the string that way.  I saw no one.  “Really”?  I had no choice, I’d have to plop upon the floor and hope that would stop the gravitational pull of my slippery hair with a different angle.

Again, I leaned close and spun the wheel.  Nothing.  I lifted that corner of the cart and tried once again to unwind the string in both directions.  Nothing!  Just then, my Grammy glasses slid from my nose and my hair once again went plop in front of me.  Figuring my face was close enough to go glasses-less, I attempted the unwinding process once again.  Then, it happened.  I realized rather quickly that my head was being pulled closer and closer to the floor and it wasn’t because I was trying to solve a string puzzle!  Now, my hair had spun around the wheel, too!  “REALLY?”

I was to the point of thinking, “Frig it!  Lemme just cut the string and my hair as close to the wheel as I can and just get it over with.” With that thought, I quickly realized that thought was easier than the follow-through of it.   My “bag” was strapped into the toddler seat at the other end of the cart …at an unreachable elevation from where I was bound, but thankfully not gagged.  Again, I looked around the best I could in hopes to see a clerk pass by.  None, of course.  Where are they when you need one?
By this time, I was already in this predicament by several minutes, and couldn’t help but wonder who in the security booth was watching from afar and justah-gigglin’ at me.  I almost wanted to wave just in case.  Without a knife and with the sleeping bag drawstring knot being far too tight to untie, I didn’t know what else to do except for maybe I’d try to friction cut the string against the edge of the wheel caster. (see 3.)

First, somehow, I had to figure out how to unwind my hair.  Thankfully, that didn’t take much time …or cost me too many roots!  I had to laugh.  Though free of one situation, I still faced another.  At least I was mobile, and I could appreciate that wholly for sure.

With my hair unraveled and mostly intact, I figured I hadn’t much more to lose.  Without hesitation, while I was already down there and without anyone in sight, would there be too much harm in trying to work the knot free with my teeth, so I could simply just pull the drawstring free?   While I ran that scenario through my head, my fingers continued working the knot.  Thankfully, my fingernails found a little wiggle room.  From there, I could work the knot until it existed no more.

With the loop untied, the tangled issue became clearer.  Furthermore, I learned that my hair was wrapped around the wheel “axle” in the opposite direction as the drawstring had been.  So, no matter which way I spun the wheel or tried to unravel, while I made one issue better, I made the other worse!  It was clearly one of those, “Damned if I do, damned if I don’t” situations.  Thankfully, my hair was slippery that day, as I most often don’t use a conditioner. That day I did!  PHEW!