DID YOU KNOW that all-invasive weed called Japanese Knotweed (“Bamboo”) that everyone loves to hate is beneficial in many ways?  I grew up snacking on the young shoots, making passageways and cabin’s in the middle of the patch, hiding from the sun on a hot day, hiding from the rain on a rainy day, too.  I used the dried bamboo canes for flute-making, woven as a mat to sit on in the middle of the patch, and as “swords”.  Who didn’t enjoy having sword fights? “On Guard!” (En Garde – yep, I come from French stock).

“Bamboo” is an edible herb in which we American’s try so hard to eradicate because it is a very invasive plant that comes from Asia, and of course, Japan.  There, it was prized for medicinal purposes, not to mention its nutrients ( Vit. A and C, phosphorus, zinc, potassium and manganese).  With its very early and rapid growth -almost up through the snow- it was an important food to carry with explorers, early settlers because of those reasons.  The plant can grow several inches a day, so imagine the food source and medical use when needed …how prized!  Japanese Knotweed was taken to Europe and planted there for its ornamental value where it started to lose the purpose-grown that was so prized by the Asians/Japanese.  From there, it was brought to the USA.  Now, you can see it scattered about everywhere, but mostly where homesteads once were.  Didn’t know that did you?  Yep, can always tell where a house/farm used to be …just look for a lonely patch of “bamboo”.

Now-a-days, most people in the USA do not know that the plant is edible and should be prized instead of scorned with hundreds of dollars trying to eradicate the plant.  While people like me wished I had some of my own.  Though, due to its invasiveness, I have refrained from introducing it to our property so far, but am very, very tempted simply because I will put it all to use.  Every inch of it.  While I ponder, there are lots of people out there that are very happy if I came and take as much of the stuff as I want.  WOO HOO for me!

Japanese Knotweed spread primarily via roots that are known (in some places) to grow up to 18’ deep.  Those fine root hairs, like the dandelion plant (another plant American’s like to hate, but I love) if left in the soil, will spawn new plants.  They will find the tiniest crack and sprout up.  As the plant grows, so does that small crack so I can understand why people do not like it around their driveways or house foundations, too.

After the plant dies away, the tall, dried, hollow stalks are left behind.  Some are too hard to break with the hands, while others are fragile.  They make great fire starters, trellises, tomato stakes, too.  The young, narrow sections can be used as straws.  Yep, sipping straws.

I have my own puree recipe created kinda out of the spur of the moment last spring and I do not share that recipe simply because I intend on putting my nature weed recipes into a book form one of these years.  However, if you search the Internet for Japanese Knotweed recipes, there are plenty. I’ve made jelly, syrups, and purees.  All of which are hits for those who try them.  Basically, the young shoots are tart and watery.  Aside from their hollow stalks, the flavor closely resembles rhubarb and can be used as a substitute in recipes.  Though you may have to adjust the amount called for …yet again, maybe not.

On a medicinal note, the entire plant is/was used to make medicines.  Coined with their early, rapid, and seemingly problematic growth, you can see why “wayyyy back when” medicines were difficult to come by so why not grow them yourself?  That is what most cultures do/did once upon a time and that is why the knotweed was grown, too.  Knotweed is used to treat mouth sores, plaque on the teeth, sore throats, bronchitis, lung diseases, inflammation, stops bleeding, etc.  The plant has a good amount of resveratrol, but mostly that ingredient is found more concentrated in the roots.  Way back when, “bamboo” helped treat tuberculosis symptoms, too, so you can imagine how valuable this plant was to the people of Asia/Japan and why, despite the common belief of wanting it for ornamental purposes, why this plant was transported to new settlements, too.  You carry the weeds, roots, seeds, or plants with you to a new area, so medicine is at your fingertips there, too.  If such plants were not prized, why add it to the carrying load?  They wouldn’t. 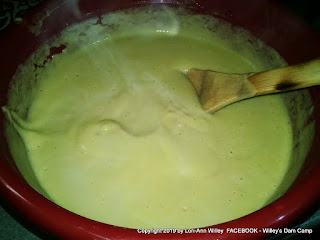 I, for one, am a lover of the Japanese Knotweed, because not only is it neat and brings back a lot of childhood memories, I love the puree I came up with, it also reminds me how far modern medicine has come.  It has come to the point that we consider a once prized, nutritional, and necessary plant as an invasive and intolerable pest.  A time when it is easier and quicker to pop a pill than grow your own. I’m not knocking modern medicine, for sure.

I can understand the mess that “bamboo” tends to leave year after year, it’s invasiveness to beautifully manicured and landscaped homes, and the work involved after the plant dies back each year, too.  However, I am a nature gal, and I don’t mind all that.

I reuse, recycle, repurpose …so, even the Japanese Knotweed is a prize for this modern gal. Maybe, if more people took advantage of the plant, they may look at the plant in a more pleasing and grateful way versus an eyesore.

We American’s are quite spoiled.  We are “weed snobs”, but is it because we are “above” the common weed?  Or, is it because we cannot control the weed, so we learn to despise it?  Or, are we just so lost in the history and medicinal values of such problematic weeds that we no longer appreciate them?

Remember, Asians/Japanese are healthier people, they live longer, and have fewer medical problems than we “fat” and “lazy” Americans who eat for convenience and flavor.  Whereas the Asian and Japanese cultures eat and use such unwanted “American” weeds as the Japanese Knotweed, dandelions, and burdock. Each is very valuable. They are all HERE for a reason.  I think it is quite unfortunate that we American’s tend not to appreciate WHY these weeds are here in the first place.