The Joy of Nature and Seclusion 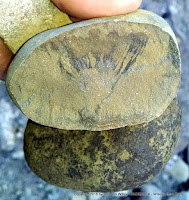 Yesterday, Paul and I decided we’d go rock and fossil hunting further into the woods.  I packed my typical tools, which consisted of, a hand rake, rock pick, magnifying glass, rock classifier screen (1/4” mesh), a couple small gold pans (just in case), a small hand trowel, a few paper towels, gloves, goggles, Zip-Lock bags, bug spray and suntan lotion.  After filling our drink bottles with water, juice, cold coffee, and electrolytes, we were ready to head to the truck.

In the bed of the truck were three, empty 5-gallon pails, three 2-liter bottles of water for rock washing, a long-handle digging shovel, and a hoe.  Before I started the truck, I asked Paul if he had his cell phone and wallet, too.  He did.  I had my cell phone, a charger with cable, and a pocket camera.  All I had to do was put a can of gas into the truck just to top the gas tank off a bit because I knew we would be away from camp for a few hours. 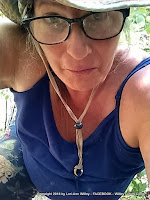 Before we left, Paul researched some probable areas for good fossil hunting.  In case we had no cell phone signal, which is often the case in these parts, Paul marked and saved a few topo map images to his phone.  I messaged our daughter, Alanda, and told her which direction we were headed and what our plans were for the day.  Just in case.

About an hour later, as I clung for dear life on a slippery and very steep slope, my phone messaged and told me I had a message waiting for me.  In case it was an important message, I allowed myself to slide a few feet down the embankment until one foot rested against a stable-enough rock.  After a few pressure pushes to ensure the rock was solidly in place, I dug my hand rake into the ground before me to ensure I kept upright if the rock below my foot gave way.  With my free hand, I reached into my back pocket for my phone.  Signal was weak, but it allowed a message to squeak through.  It was from our daughter. 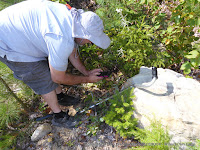 Before we left camp, I sent her a photo of a fossil I found.  She asked if I knew how old it was.  I was able to thumb swipe …something that I’m HORRIBLE at, by the way… “Don’t know”.  Then, quickly snapped a photo to let her know I couldn’t type anymore now.  A “placeholder photo”, if you will.  It is something I use as a reply, of sorts, when I’m busy doing something and I cannot stop to type.  Our daughter replied to the photo, “Haha Wow, go you!!”  Then, typed something mushy, “You’re soo pretty!”  To that, I had to laugh.  Love is a wonderful thing. 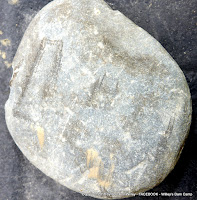 A while later, and after Paul kept navigating the base of the steep slope in which I struggled, I decided, “There is nothing to find up this far.  I’m going to work my way down.”  Just then, after I grabbed a protruding root above me, it dislodged a rock that came tumbling down past me.  I yelled for Paul, “Watch out!”  Then, I called down, “I wish you’d tell me when you are directly below, ‘cause these rocks aren’t secure up here.”  With a few small trees between me and him, I heard him mumble, “Ok!” as the rock came to a stop not two feet beside him.

Navigation is not easy for Paul.  Despite that, he was able to get up and walk around a bit with his cane.  He depended on boulders and small trees to prod him along, yes.  He moved nearly as slow as I did upon the unstable slope above, and he did quite well during our excursions.  He even found more keep-able fossils than I did.  It was great to have him with me on such a doing.  I really miss doing such things with him, but when disability strikes, we change our hobbies out of both necessity and want.  Otherwise, I doubt if I would have written books, learned to sketch or paint.  Paul had a good day yesterday, so he was able to go with me.  Even so, after a while, he became fatigued and pain-filled.  Still, he plodded onward.  Literally.  I think he only fell once.  Not to be competitive or anything, but I never fell at all yesterday.    Imagine that!

Once in the truck again, Paul zoomed in on his phone map to see how to get to the next location of interest.  Meanwhile, I sent our daughter an update on our location.  I thought I’d be funny and snap a picture of the GPS display in the truck.  It showed a small section of the skyline and then a gray screen with an animation of our truck sitting still surrounded by a gray mass.  Even according to the GPS and the rest of the world, we were off the beaten path (aka road).  It did little to let her know our location, but it told her we were still en route, in the middle of nowhere, and the direction our truck was pointed -North-ish.  So, she knew our direction of travel at least.

The next time Alanda messaged, we were not within cell range to receive it.  At 5:05pm, as I once again, straddled and slid along another steep embankment many miles away from our last known reception, a weak signal found the phone in my back pocket; a series of beeps vibrated my right patoot cheek.  I was just a few feet away from an uprooted tree, so while walking on all fours, I reached those tree roots after a few short minutes, but not before I stopped to examine a neat fossil find, of course.  Come to find out, Alanda started working on one of her paintings and asked me which colors I use to make the color teal.  I plopped on my knees for better stability, as I did not trust the small, dried root I leaned upon and replied.  “I can’t remember. Will think.”  Then, “Thank blue or green and zinc????”  “Thank” was supposed to be “Thalo”, but thankfully, she didn’t get that far.  She figured it out on her own.  Then, sent her a picture of the just-found fossil.

As I brought the phone around to my back pocket again, another message came in.  Then, another.  A Facebook follower sent me a picture of a plant to identify for her. Another sent me a copy of an article that had to do with one of my art pieces.  A friend had already sent me the article that morning, so no need in reading it twice, especially during the balancing act I was in at the time.  Had I fallen while trying to do so, that would be another article.  Maybe of the obituary type.

Paul and I stopped to explore different areas throughout the afternoon.  As darkness closed in, the air cooled and the biting flies emerged.  Too busy looking for rocks, I only stopped to call out to Paul occasionally to ask how he was holding up if he needed help, and to let me know if he needed me to carry anything for him.  Like an animal that must leave territorial “markings”, each stop, I, too, had to stop and pee before moving onward.   With a chuckle, I admitted to Paul while I was in mid-squat, “I guess I can stand up and pull my pants up, can’t I?  I finished peeing about two minutes ago and I’m still squatting while I look at rocks around me.  To top it off, the truck is parked in the middle of the road.  I guess there is no fear of someone coming along anyway.  No one to catch me with my pants down.”


At times, we came to spots where we should not have navigated.  To refer as “roads” would leave any outtah-statah scratching their heads.  Tree limbs slapping our bodies inside the truck through opened windows.  I kept mine down most of the time because I needed to part the limbs and stick my head outside to watch my tire placement.  I don’t know how I missed one rock, but I did.  It was a sharp one, and there was no room to do anything except a deep breath and some wishful thinking. 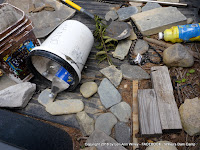 Stepping outside the truck was a must on several occasions.  Sometimes, I needed a head-on view and to visually line the tires up to perfection or risk popping a tire or getting stuck.  Putting the truck in 4-wheel drive was mandatory in a few spots -through road washouts, flooded roadways, and going up steep embankments with rain-washed-out trenches big enough to swallow a tire.  There was one spot where I had to find rocks enough to fill a tire path before we could continue onward. Then, too, we dipped into a gravel pit where I found very soft gravel and sand-like ground.  I didn’t need the shovel but was thankful I grabbed it.  Just in case!   Fun stuff.

All that is rewarding, but what put me in awe mostly were two things:

First, with the aid of modern medicine, technology, and a good “Paul Day” on top of that, Paul was able to go rock/fossil hunting with me.  This is something that he hasn’t been able to do for many, many years.  Yes, he was limited where he could walk and search, but just going with me is a huge reward. 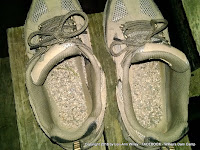 Second, how fun is it when you know your eyes are probably the first and only human to see rocks dated millions upon millions ago?  Rocks that are in the woods, hidden and only exposed by the force of gravity, mother nature and her precipitous ways when it comes to weathering / chemical erosion of the landscape, and time.  Great stuff to realize the phrase, “For our eyes only” really does mean just that when in the wilderness, untouched and unseen by man …and many beasts, too.

Ahh!  AND, what’s not to love about being “in the middle of nowhere”?  Where even modern technology can’t find you?  NOTHING!