From time to time, I will casually, or even comically mention the name, Pamola.  Those who are familiar with Mount Katahdin,  the history and folklore of the Penobscot Indians know the legend well.

In accordance with the Penobscot people, Pamola was an evil spirit that roamed the mountain.  He was a Penobscot god of thunder and protector of Mt. Katahdin. Pamola had the body of a man, head of a moose, and the wings and feet of the almighty eagle.

It is said that Pamola resided on the eastern peak of Mount Katahdin where he protected to such great extent that those who dared climb to the summit were devoured by the beast itself.  Therefore, those tribesmen never returned.  If you look at the photos below, you see "Knife's Edge" and can certainly begin to understand why people did not return.

I know of many hikers who said they have climbed Mount Katahdin many times, all her trails, and annually, even.  Some, hike during the winter months, though I can't for the life of me understand why.  It is said by many, 'I crawled across Knife's Edge.  I'll never do it again.'  Comments such as, 'I'll never climb Knife's Edge again'.  'All was fine until the wind blew.  I thought I'd fall to my death'. 'The climate is different there.  Even during the summertime, the rocks are iced!'  'I reached Pamola Peak, saw Knife's Edge and turned around. I can think of many other ways I would rather die.'

Such comments are nerving even to the bravest.  Yet, they also invite a challenge that so many accept.  Yet, I look at Pamola Peak, Knife's Edge, and what I call the summit-summit every day.  While I gaze, I am in awe of the history of the people, the mountain, and of their past.  What will become of Mt. Katahdin, if one day, they install a tramway for tourists?  I've heard of such mention, and, though that would be the only way I'd ever reach the top, or even cross Knife's Edge, I would not be in favor of that obstructed view.  I'm one that enjoys the thought of preservation of nature as she is, and I do not enjoy the thought of my view obstructed by anything except for a passing cloud, rain, or snow.  However, I fear that day will come.  I just hope that it is not in my lifetime.

The Penobscot Indians believed that Pamola, even at her base, prevented humans from scaling his mountain home.  There are references that even at the base, Pamola stirred up such blizzard-like conditions that were unsurvivable.  So harsh, that hikers could not advance another step.

I must say that I appreciate and enjoy the folklore of the Penobscot people, and so did a man by the name of Leroy Dudley.  His "yarns" are enjoyed by any reader of his book, "Chimney Pond Tales".  His stories are quite amusing, and I must admit, he is an inspiration for me as well.  For, since I read his book, I started a couple of my own.

A few years ago, I wrote a book about a young boy who was to become the leader of his tribe.  The story takes the young boy through trials surviving a harsh storm never before experienced by his people.  Lost, he spends many weeks in search of his tribe.  As a reader, you journey with him. In the book, Pamola is mentioned -evolved around two old women who curse the beast for the loss of their mother as they vow to see revenge.  That book is in the editing process.  I have also started another book that directly involves Pamola as one of the main characters.  Though, well on its way,  that will take a while to write.


The Penobscot people and their Pamola inspired me, but it wasn't until I read Leroy Dudley's book many years ago that set me in motion to write a couple writing pieces of my own.  And, of course, one winter day, I had to "tame the beast", too! 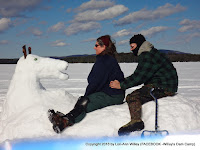 If you chance upon the book, Chimney Pond Tales, it is an amusing read.