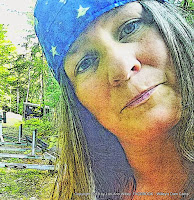 Ima Plannah, which means I thoroughly plan almost everything beforehand.  Before I work on an already started painting, it sits where I must see it as I pass by from any direction.  Each pass, my brain churns into action as I pinpoint a correction or a color choice.  Furthermore, I fix or mix those colors in my brain well before I again touch paint to canvas.  If skepticism torments me, I further “paint" the correction in my mind.  Maybe, I have an odd disorder, but it works for me.  To me, it is kinda like the rule of thumb, a "Measure twice, cut once" mentality.  It is the same as when I sketch.  I will study a face here and there for days or weeks before I touch a pencil to paper.  It is just how I am and probably how I will always be.  When it comes to writing, such as this blog, all these entries are impromptus.  I have a topic and the words just flow as I type them, which is probably why sometimes, they don't make much sense.  However, when I write my books of the fiction kind, I “write” inside my head for weeks on end.  When I think all the "bugs" are worked out, only then will I open a blank document and start typing. 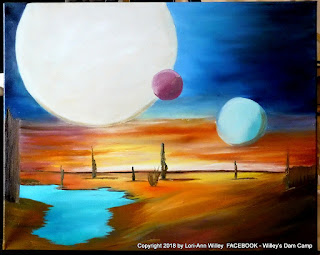 A couple weeks ago, I started an "unrehearsed" painting.  With an idea, or rather, a combination of ideas, I decided to step outside my comfort zone and started painting without much planning ahead of time. That was a mistake that won't happen again.  I’m SO NOT an impromptu painter.  Those who follow our camp page will recognize the partial painting seen here.  After I showed it to our daughter via Messenger on Facebook, I told her my concept until that point, and being a creative woman, I knew her thoughts would help guide me into the area of the unknown …where did I want to go with this painting?  I wanted planets.  I wanted a desert scene, and I wanted it all to be surreal with metaphysical qualities, yet with a message or at least a painting that people would have to stop and think about the meaning behind it all.  Or, better yet, come up with their own interpretation.  I ran a few ideas by her.  Though I had one idea that I wanted to “run with”, I really didn’t know just how to go about it.  With the basic layout "sketched" with paint, the wet canvas needed some drying time before I could continue.  Until then, I would ponder the placement of the final details.

While in bed sick this past week, both Paul and I, with the worst bug we’ve had in decades, I slept a lot and watched TV a lot.  Not being much of a TV person in the first place, Paul knows to watch whatever he feels like watching and if I’m interested, I’ll watch with him.  If not, then I’ll turn over and go to sleep.  Even if I do like the show, often I zonk part way through due to a body that is tired from daily living off the grid.  However, Paul tries to find a show he thinks I'll like.  Usually, a comedy or something educational.  When Paul turned the channel to watch Star Wars, I found it a perfect opportunity to just roll over and go to sleep.  I never understood why that is such a beloved movie by so many.

So, today comes, and here we have it … an unfinished painting stares at me from the next room, I'm still not feeling up to par, tired of laying down, and with the feeling that I'm totally done watching TV. ...like forever, is when I became inspired with renewed hope such as the title of this blog indicates.

After I posted my latest blog, our friend, Michael messaged to see how we were fairing the flu.  Then, he asked me if I was willing to read, and then, critique a synopsis of a movie script he had written.  Though he knew I purchased his latest book, I told him that I hadn’t read it yet, so could I give my thoughts without first reading the book in which the script is based?  He said I could if I didn’t mind the spoiler alert.  To that, he gave me a quick rundown of the storyline.  I was intrigued.  It seemed to be right up my alley.  We further discussed each of our connections in the film industry.  Though he already has his own connections, it doesn't hurt to have a few more -a "plug" of the informal kind is still a plug.  Right?

Over the next couple of days, he again checked in on us.  Yesterday morning, feeling better overall, when I opened Messenger, I saw that I had yet another message waiting from the man.  This one had an attachment.    It was his synopsis!  Still with a rumbling stomach and foggy brain, I knew I wasn’t ready to give an honest read-through.  However, after being uppinaddah bed for a few hours, and with a cup of hot coffee, that I would learn later was a very bad idea, I sipped as I read slowly and probably too methodical-like.  Within the first few lines, I was intrigued.  Not only were his words carefully chosen, but they also flowed.  They captivated me, and they held my interest more and more as I read.  I saw the scene play before me and I loved the storyline thus far.  Quickly, I scrolled to see the length of the .pdf.  I was met with disappointment when I learned that I was almost halfway through it already.

As I continued to read, the painting mentioned above threw visions in my face as I unintentionally saw my painting slowly come together through his words to the point that I struggled to separate my painting from the story before me.  Ironically, the painting and the storyline aren't even similar in theme or meaning.   Oddly, as I read further, my painting wouldn't leave the forefront of my visions.  I saw each "planet" now as a "bubble" bringing life to a new world.  Though that is the intent of my painting, why did my mind bring these two storylines together?  A book : A painting.

Then, it happened, the introduction of what I considered a “new angle” that further captivated me, as I have four different books on Maine Native American’s sitting beside me.  I stopped reading and glanced over at my stack and smiled. His synopsis piqued yet another interest of mine …my own heritage and the seeking of who, what, when, how, and why I am via my Native American roots.  I love mythology and wondering “why” such stories came to be.  I had to admit to my friend, that I would have to re-read his synopsis at least once more because his summary brought forth my other loves in life -Maine, Off the Grid, and Native American’s.

In my own mind, I had separated his story into two stories, two visions and for some reason, my mind kept them separated.  Furthermore, my brain kept throwing my painting into it all, which is not fair to the story he had written. Though, I only told him that I would have to re-read his synopsis again.  I did not tell him why.  My brain had been greatly inspired.  A re-read, or two, or three is a must and I already know that each will be enjoyable.  Putting his words into one story instead of my mind that kept interrupting and separating them will be enjoyable, too.  Though he is looking for a critique, I’m not so sure I will have one.

In a very round-about way, his words in motion and my painting on a stilled canvas is a movement of a different kind ...and, on more than one level.  A personification, if you will, that after reading the synopsis only once, has left me flooded with curiosity.  I believe that this writer certainly has the “hook” he’s looking for.  At least I think so. However, I may be a little partial of his topics, writing style, and the man himself, too.

As for my unfinished painting, I smile at the intent behind it all.  Maybe, just maybe, upon completion, it'll make sense to others, too.  Earth, space and the creation of it all, one bubble at a time.  Just like Michael put one word after another to create such an intriguing storyline.  Two weeks ago, I was "stuck" in how to further portray my thoughts on canvas.  Now, I know without a doubt that I'm on the right track.  No one else has to understand how a totally different storyline confirms, in an odd way, that my painting makes perfect sense in a surreal kind of way.  I hate the phrase, “Apples and Oranges”, but in this case, it works …again, in a metaphorical kind of way!

When I asked Michael if I could mention his name and book in this blog entry, he came back with, "I read your Blog and was deeply touched - and I MUST see that finished painting! You should know the full Script is actually completed. And yes you may plug the book. You may want to mention it was a rushed trial run for the movie script which is far better".  The book sits in front of me.  Today, I start reading it with the hope to someday watch it play out in a movie upon the TV.  It'll be one movie that won't prompt me to roll over and zonk like so many do.

When inspiration strikes, it doesn't matter from where or from what, but run with it!  Even if that inspiration does nothing more than to ensure yourself that you are on the right track with a project, with life, and/or anywhere in between!